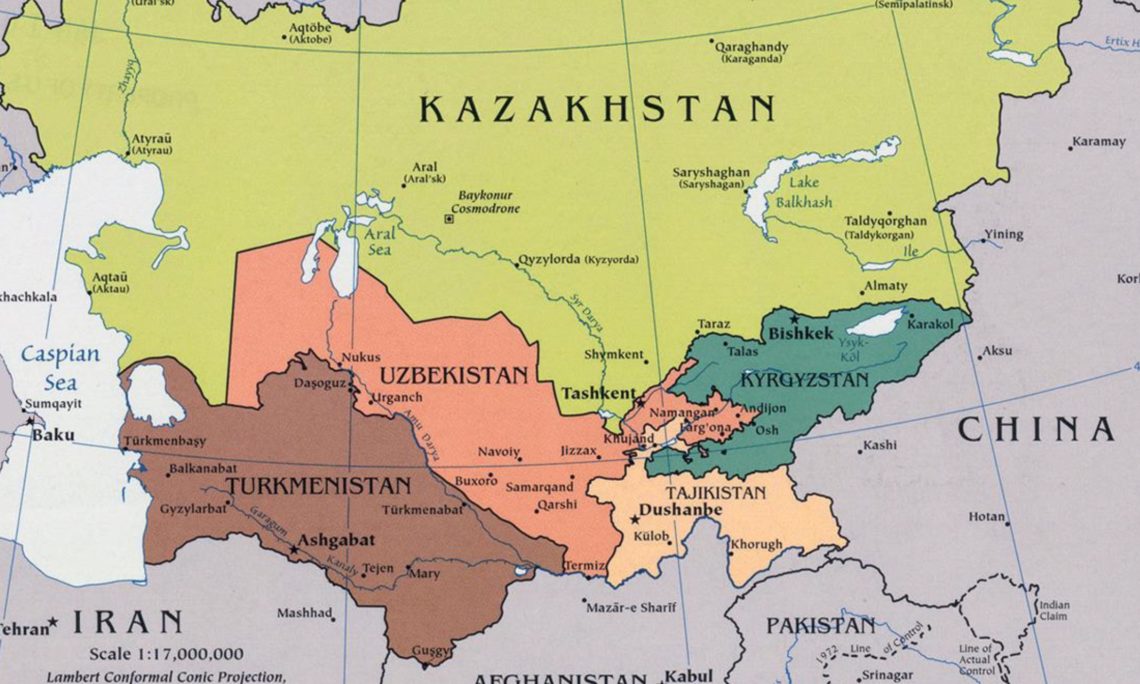 The United States was among the first countries to welcome the independence of Kazakhstan, the Kyrgyz Republic, Tajikistan, Turkmenistan, and Uzbekistan and has worked consistently over the last three decades to support the security, development, and prosperity of each of these countries.  Central Asia has always been the strategic and commercial crossroad of civilizations between Europe and Asia.  The United States’ primary strategic interest in this region is to build a more stable and prosperous Central Asia that is free to pursue political, economic, and security interests with a variety of partners on its own terms; is connected to global markets and open to international investment; and has strong, democratic institutions, rule of law, and respect for human rights.  A stable and secure Central Asia contributes directly to U.S. efforts to counter terrorism, support regional stability, promote energy security, and enhance economic prosperity in the region and beyond.

To that end, the United States has provided over $9 billion in direct assistance to support peace and security, democratic reform, and economic growth, as well as meet humanitarian needs.  Equally important, the United States has led the World Bank, International Monetary Fund, European Bank for Reconstruction and Development, and the Asian Development Bank in extending over $50 billion in credit, loans, and technical assistance designed to support the development of the region.  The U.S. private sector, meanwhile, has invested over $31 billion in commercial ventures in the region, generating thousands of local jobs and building human capacity.  Finally, the United States has built strong people-to-people ties with each of the countries of Central Asia, including by directly funding over 40,000 student and professional exchanges.  Large numbers of Central Asians have immigrated to assorted American cities and now make up vibrant and dynamic diaspora communities that retain deep connections with their homelands.

Since the previous United States Strategy for Central Asia was approved in 2015, new leaders in the region have created new openings for reform-oriented development, intraregional connectivity and cooperation, and greater U.S. engagement.  Specifically, new governments in the region have indicated a deeper commitment to pursue political and economic reform, including through bilateral cooperation with the United States.  In addition, improvements in interregional relationships and a growing appreciation of the value of working together as a regional group have expanded the potential for U.S. engagement through the C5+1 platform.  Central Asian states’ efforts to increase foreign investment and attract United States business is increasing the willingness of Central Asian leaders to implement rule of law reforms and comply with international norms.

The U.S. has funded over 70 projects across Central Asia that protect and preserve the region’s unique cultural antiquities, traditions and archaeological sites for future generations.

The new Central Asia Strategy assumes some constants from the previous strategy about key developments in the region: domestic and cross-border terrorism will remain a primary security concern, and Central Asian states will continue to face threats to stability, such as from radical extremism, illicit drugs, and misinformation.

Finally, some core principles underpin this new strategy.  Central Asia is a geostrategic region important to United States national security interests, regardless of the level of United States involvement in Afghanistan.  The United States needs to emphasize cooperation in those areas where it has a comparative advantage, particularly to promote private-sector engagement and transparent government policies and regulations that foster adherence to international standards, including environmental safeguards.  When progress on reform is uneven, the United States should, in coordination with like-minded partners, offer concrete assistance to overcome obstacles, while communicating the benefits of aligning with international norms and law.

Moving forward, the United States will work with Central Asian states to build their resilience to short and long-term threats to their stability; to strengthen their independence from malign actors; and to develop political, economic, and security partnerships with the United States.  U.S. development efforts should foster regional independence and not create dependency.  The United States has six overarching and mutually reinforcing objectives.  These objectives are:

1. Support and strengthen the sovereignty and independence of the Central Asian States, individually and as a region. With consistent U.S. engagement on economic, energy, security, democracy, and governance issues, the Central Asian states will function as a region of cooperative partners, increasing their ability to maintain individual sovereignty and make clear choices to achieve and preserve economic independence.

The United States will increase its diplomatic engagement in the region and will provide programmatic assistance to support local government efforts to strengthen democratic institutions and enhance economic prosperity. In addition, the United States will support efforts to bridge differences that have divided the region.  U.S. support for a unified electric grid across Central Asia will help facilitate the trade of surplus electricity to reduce costs for consumers, generate revenues for suppliers, improve regional energy security, and reduce reliance on external actors.  The American University of Central Asia in Bishkek is a growing hub for the region’s greatest young minds to earn U.S. degrees, gain in-demand business skills, and create life-long regional affiliations.

Through bilateral military and civilian partnership programs, the United States is working with the Central Asian states to: understand, identify, prevent, and counter violent extremism; return, rehabilitate, and reintegrate foreign terrorist fighters and their families into society; and strengthen the capacity of law enforcement and security services to protect borders and interdict the movement of terrorists and trafficking into and across Central Asia. The United States has invested over $90 million into border security in Central Asia, conducting over 200 training activities and training over 2,600 border officers.

3. Expand and maintain support for stability in Afghanistan. The Central Asian nations will become stable, secure, and engaged partners of the United States and continue support for international efforts to stabilize Afghanistan.

The United States recognizes that a secure and stable Afghanistan is a top priority for the Central Asian governments, and each has an important role to play in supporting a peace process that will end the conflict. The United States will encourage the Central Asian states to develop economic and trade links with Afghanistan and to model stable governance of multi-ethnic, Muslim-majority countries.

Recognizing that prosperous, stable, and secure economic partners rarely engage in armed conflicts, the United States supports robust business and infrastructure ties between Central Asia and Afghanistan. The CASA-1000 project aims to bolster Central Asian economies by facilitating electricity exports from Central Asia to Afghanistan and Pakistan.  Simultaneously, we are working to simplify visa and customs processes in Central Asia in support of the Lapis Lazuli Corridor, which promises to dramatically improve Central Asian and Afghan trade with Europe and Eurasia.

Border Security
The United States has invested over $90 million in border security to better detect, interdict, and prosecute illicit trafficking, including training for customs and border guards, upgraded border security equipment, and establishing 13 operational border posts across the region.

The United States provides technical expertise to the countries of Central Asia in developing and implementing justice sector reforms that are essential for protecting human rights, as well as improving the investment climate and retaining highly skilled human capital. The United States supports strengthening civil society organizations so that citizens can provide meaningful input on key public policy issues, enhancing governments’ responsiveness to their citizens.  U.S. Embassy programs provide hundreds of journalists with skills and networks necessary to help keep governments accountable to their citizens and highlight new government efforts to improve the lives of everyday people.

6. Promote United States investment in and development of Central Asia.The enabling environment for business in Central Asia will be transparent, open, fair, attractive to U.S. businesses, and supportive of broader development goals.

The United States is working with each Central Asian country to undertake the reforms needed to attract more foreign investment, including from American businesses.  Through primary, secondary, and tertiary education reform, the United States is working to equip the next generation with the in-demand technical, managerial, English language, and critical thinking skills needed to support 21st century economies that attract international investment and produce local entrepreneurs.

*Globally, The United States is the largest combined shareholder of leading multilateral development banks (MDBs), including the World Bank, Asian Development Bank and European Bank for Reconstruction and Development. Between them, MDBs have provided in excess of $50 billion dollars in grants, loans, and guarantees to the Central Asian Republics since independence.

The C5+1 Diplomatic Platform
C5+1 activities convene representatives from the five Central Asian states and the U.S. to address common concerns, as well as to promote regional dialogue and cooperation.

The effective implementation of this strategy will help ensure that Central Asia is a stable and secure region that is deepening engagement with the United States.  Each country should implement reforms that open the region to international investment and strengthen democratic institutions.  We will work to ensure the countries of the region are increasingly better connected to Europe through the Caucasus, to Afghanistan and South Asia, as well as to global markets.  We will help the countries strengthen their economic and political sovereignty, develop deeper resilience, and improve their willingness and ability to cooperate with each other in areas of mutual interest.  Successful U.S. engagement in Central Asia will also advance our own national security interests and contribute to the defense of our homeland, citizens, and interests abroad.  Close relations and cooperation with all five countries will promote U.S. values and provide a counterbalance to the influence of regional neighbors.  Finally, expanding opportunities for U.S. business will enhance economic prosperity in the region, as well as support employment and industry in the United States.

U.S. participation in the C5+1 supports regional connectivity and Central Asian sovereignty, independence, and territorial integrity. C5+1 projects are being implemented across Central Asia with over $34 million from the United States Government in the areas of security, economic connectivity, and environment. Through the C5+1, participating countries have affirmed their commitment to: