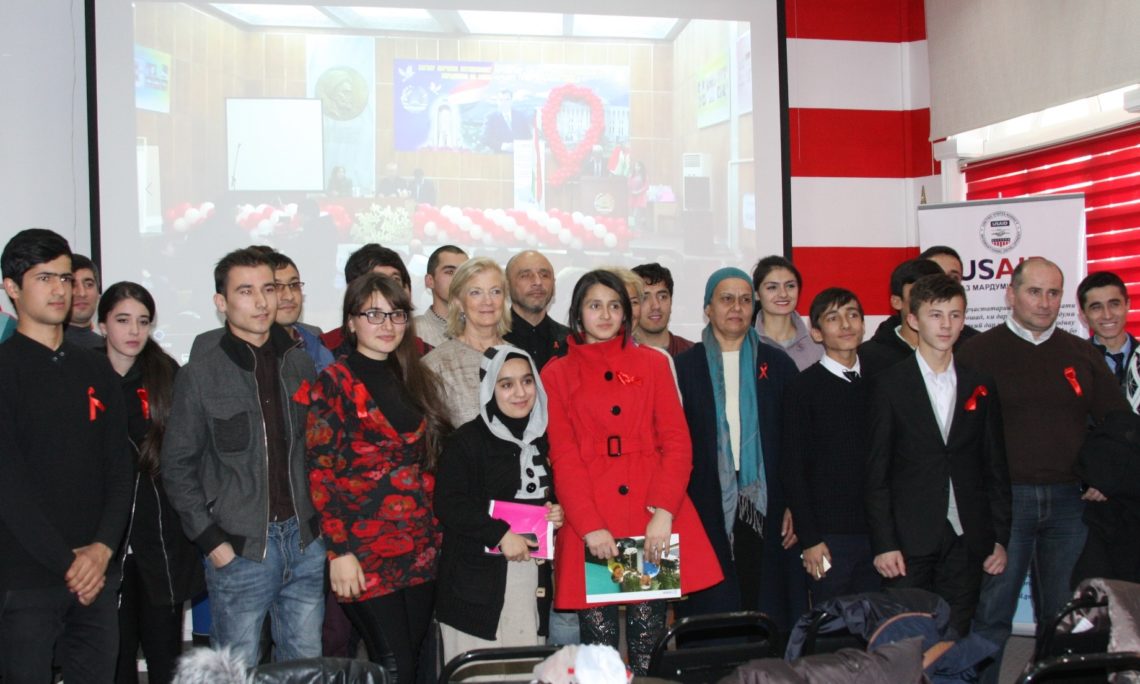 Dushanbe, Tajikistan, December 1, 2016 – During the week of November 27 to December 1, the United States Government hosted a series of events commemorating World AIDS Day to raise awareness of the HIV epidemic especially among vulnerable groups and to combat stigma and discrimination against people living with HIV.

On November 27, the United States Agency for International Development (USAID) HIV React project hosted an edutainment event in Khujand featuring training and quizzes on HIV prevention topics among people living with HIV, people who inject drugs, and ex-prisoners in collaboration with the Sughd AIDS Center, Sughd Narcology Center and NGOs. On November 28, 29 and December 1, the USAID HIV Flagship project hosted three community-based events in Dushanbe, Vahdat and Khujand featuring information on HIV, sketches around stigma and discrimination, HIV quizzes, musical performances, and a competition on the best HIV/AIDS poster among city health centers. These events were held in collaboration with local health centers and with NGOs working with key populations at high risk of HIV, including Marvorid, Bovary-Plus, and Nasli Javoni. On December 1, a World AIDS Day concert, hosted in collaboration with NGO Spin-Plus, UNDP and UNAIDS, featured local popular musical groups to raise awareness of HIV/AIDS among young people.

On December 1, U.S. Ambassador Elisabeth Millard participated in an event at the American Corner in Dushanbe featuring a panel discussion led by three NGOs working with key populations in Tajikistan – Spin-Plus, Marvorid and Bovary-Plus – sharing their experiences of working in Tajikistan with people who inject drugs, sex workers, prisoners and people living with HIV. The U.S. Centers for Disease Control (CDC) and Prevention also conducted a question-and-answer session on HIV in Tajikistan at the event.

World AIDS Day is a worldwide event held on December 1 every year to raise awareness of the global epidemic and support HIV prevention efforts and care of those living with HIV. The spread of HIV remains a serious public health problem in most of the world, including Tajikistan. According to statistics provided by the Republican AIDS Center in Tajikistan, there have been 8,504 cases of HIV officially registered since the beginning of the epidemic through September 2016, of whom nearly 2,000 have died. Tajikistan has a concentrated epidemic among key populations, with injecting drug use and sexual transmission the key driving factors. There are an estimated 16,000 people living with HIV in Tajikistan, which indicates that more than half are unaware of their status.

The HIV programs funded through the President’s Emergency Plan for AIDS Relief (PEPFAR) and implemented by USAID and CDC in Tajikistan are aligned with the UNAIDS Fast-Track Strategy and 90-90-90 global targets, which aim to increase access to prevention and treatment services. By 2020, 90 percent of all people living with HIV will know their HIV status; 90 percent of all people with diagnosed HIV will receive sustained antiretroviral therapy; and 90 percent of all people receiving antiretroviral therapy will have viral suppression. PEPFAR invests approximately $15 million per year in Central Asia, of which approximately 30% for Tajikistan for HIV prevention and treatment programs.