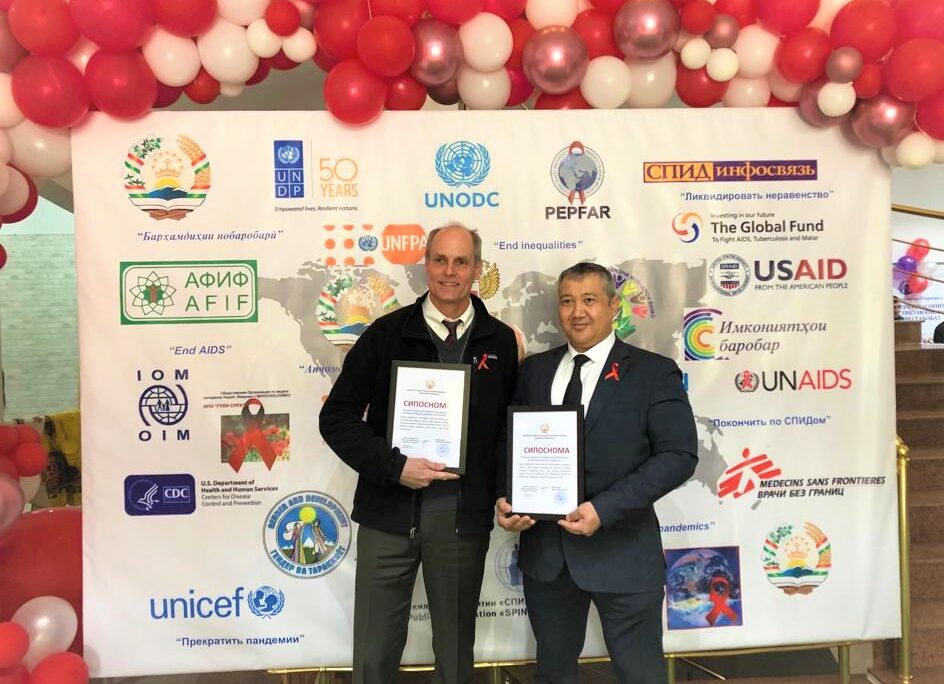 Dushanbe, Tajikistan, December 1, 2021 — The United States joins Tajikistan in observing World AIDS Day to support people living with and affected by HIV; raise awareness about HIV in Tajikistan and around the world; combat stigma and discrimination against people living with HIV, including vulnerable populations; and commemorate those who have died from an AIDS-related illness since the beginning of the epidemic.

This year the United States government is celebrating 30 years of partnership with Tajikistan and 18 years of engagement to respond to the HIV/AIDS epidemic in the country.  The U.S President’s Emergency Plan for AIDS Relief (PEPFAR) partners with Tajikistan to control the HIV epidemic by strengthening the service delivery provided by the healthcare system, increasing the role of community organizations in HIV prevention, care, and treatment, helping prevent the spread of HIV/AIDS, and supporting those affected to receive effective treatment.  Since 2003, the United States through the U.S. Agency for International Development (USAID) has provided more than $40 million to help prevent the spread of HIV/AIDS in Tajikistan and help those affected receive effective treatment.

While progress is being made, the spread of HIV infection remains a serious health problem in Tajikistan, where an estimated 14,000 people live with HIV.  By October 2021, 71 percent of HIV-infected adults knew their status; of them, 86 percent were on life-saving antiretroviral therapy; and among those on treatment, 87 percent were virally suppressed, meaning that the risk of infecting others was reduced.  To accelerate the epidemic control, reduce mortality from acquired immunodeficiency syndrome, and achieve universal access to high quality HIV services for prevention, treatment and care, in February 2021, Tajikistan’s government developed and approved the seventh National Program to fight HIV/AIDS in the country for 2021-2025.

In response to the COVID-19 pandemic, Tajikistan, in partnership with PEPFAR, has been able to leverage health systems and community partners to adapt, make available, and maintain services for people living with HIV.

PEPFAR and USAID, in coordination with the Ministry of Health and Social Protection of the Population, serves to support the implementation of this HIV program by providing more effective and accessible HIV prevention, treatment, and care.

This year’s theme is “Ending the HIV/AIDS Epidemic: Equitable access, Everyone’s Voice.”  It highlights the U.S. government’s strong commitment to ending the HIV epidemic globally by addressing health inequities and ensuring the voices of people with HIV are central in all our work.  The year 2021 has been especially poignant as we mark 40 years since the first five cases of what later became known as AIDS were officially reported and honor the more than 36 million people who have died from AIDS-related illness globally since the start of the epidemic.