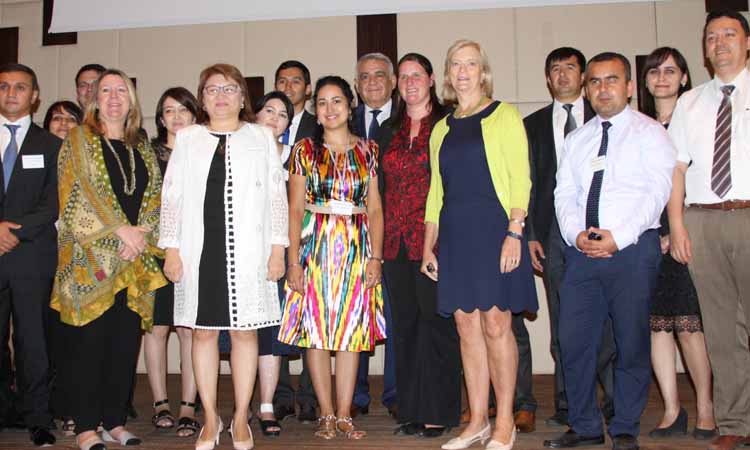 Dushanbe, Tajikistan, August 26, 2016 – The USAID Land Reform and Farm Restructuring Project hosted an event in Dushanbe to celebrate the completion of this three-year project aimed at strengthening land-use rights to help create a land market in Tajikistan. U.S. Ambassador Elisabeth Millard and Chairman of the State Land Committee Ahmadzoda opened the event attended by donor representatives, government officials, and other stakeholders.

Since 2013, the Tajikistan Land Reform and Farm Restructuring Project has been at the forefront of USAID’s efforts in land reform. The project supports the restructuring of dehkan farms and works closely with the intergovernmental working group on land reform management to submit legislation to increase land security for farmers and other land users. One of the project’s main achievements was to facilitate the adoption of the new law on dehkan farms which received approval in March 2016. This law allows dekhan farms to be recognized as legal entities and gives farmers the right to build temporary structures on their land.

The Land Reform and Farm Restructuring Project has increased the capacity of the government of Tajikistan to introduce progressive land legislation and policies with the aim to establish a functioning land market. Such a market would increase land productivity and efficiency and promote agriculture investment. In addition, it has informed farmers of their land rights through comprehensive training, legal assistance, and public outreach efforts, and it has provided technical training on land rights issues to local government officials, judges, public prosecutors, and defense advocates. The activities from this project contributed to the U.S. Government’s goal of implementing successful agrarian reforms and reforming national agriculture policies under the Feed the Future initiative*.

The USAID Land Reform and Farm Restructuring Project is one of the many assistance projects made possible by the American people through USAID. Since 1992, the U.S. Embassy in Dushanbe has provided more than $1 billion in programs that support Tajikistan’s security, democratic institutions, social sector, and economic growth.

* Feed the Future is the U.S. Government’s global hunger and food security initiative. With a focus on smallholder farmers, particularly women, Feed the Future supports partner countries in developing their agriculture sectors to spur economic growth and trade that increase incomes and reduce hunger, poverty and undernutrition. For more information, visit www.feedthefuture.gov .