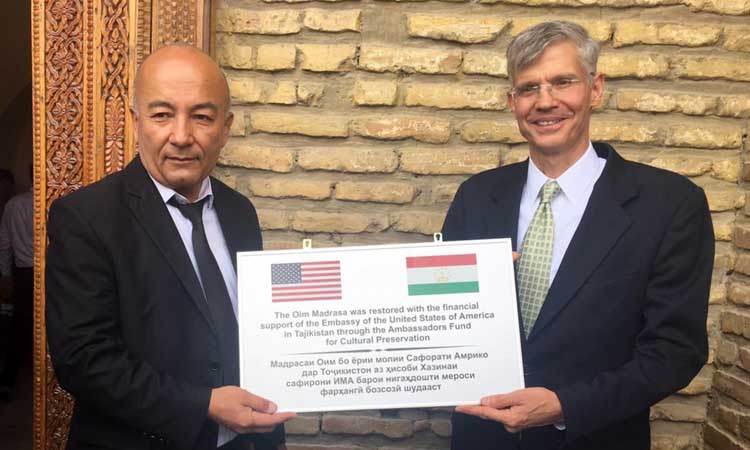 Dushanbe, Tajikistan, 25 June 2019 – The United States Ambassador to Tajikistan, John Mark Pommersheim, joined local authorities to celebrate the opening of the historical Oim Madrasa, the first educational institution for women in Tajikistan.  Through the Ambassadors Fund for Cultural Preservation (AFCP) program, the U.S. Embassy awarded the Public Organization Imdodi Ghayrat a grant of $77,154 for the restoration and renovation of the rooms, walls, and roofs of the madrasa.

Public Organization Imdodi Ghayrat, in close cooperation with local authorities, implemented the restoration of the Oim Madrasa, which now serves as a museum overseen by the Ministry of Culture.  Built in the early 19th century (1824-1825) with the help of local craftsmen, Oim Madrasa is a unique historical site that hosted female students.  The Tajik government has registered the cultural monument in its Catalog of Historical and Architectural Sites.

The U.S. Embassy’s AFCP program is devoted to preserving the unique cultural heritage of host countries.  Since 2001, the AFCP has funded 17 projects in Tajikistan, providing almost $620,000 to preserve Tajikistan’s unique cultural heritage.  Previously-funded projects include the preservation and protection of the 9th Century Khoja Mashhad Madrasa, the Mausoleum in Shahrituz, murals from the Lower Palace of Ancient Panjakent, the sixteenth-century Madrasai Kuhna of Hisor, and the restoration and protection of a collection from the State Museum of Antiquities.  More information about AFCP projects in Tajikistan can be found at https://bit.ly/2WZvcB3.

Since 1992, the American people have provided over $1.8 billion in programs and humanitarian aid that support Tajikistan’s democratic institutions, health care, culture, education and economic growth.