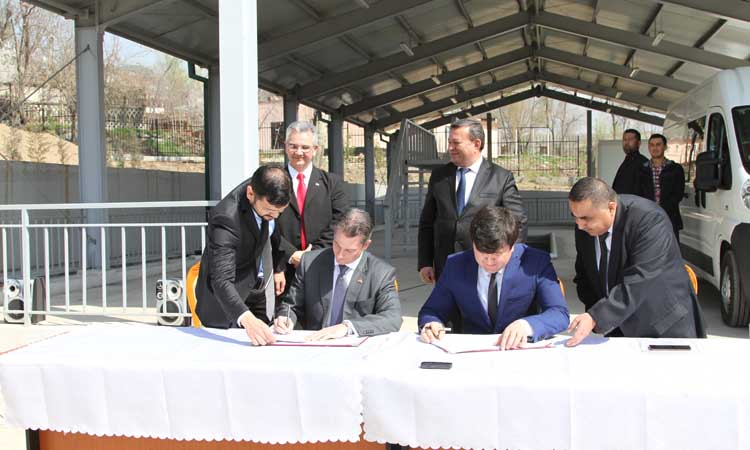 Dushanbe, Tajikistan, March 20, 2018 – The Export Control and Border Security program (EXBS) of the United States Embassy in Dushanbe donated a new regional training center for prevention of weapons of mass destruction, nuclear non-proliferation, and export control to the Government of Tajikistan.  This facility costing $370,000 consists of four canopied outdoor training areas, a simulated port of entry with inspection booths and vehicle and pedestrian gates, as well as second floor of conference hall to an existing building.  This regional center will aid the Nuclear Radiation and Safety Agency in its ability to provide enhanced interdiction training to its personnel, particularly in the area of weapons of mass destruction and conventional arms in order to interdict illicit material and other forms of contraband crossing the Tajik border.

Chargé d’ Affaires Kevin Covert, President of Tajikistan’s Academy of Sciences Farhod Rahimi, and Director of Nuclear Radiation of Safety Agency Ilkhom Mirsaidov participated in an opening ceremony at the new training center located in Dushanbe.  Chargé Covert remarked, “The United States Government shares the same goals of the Government of Tajikistan to combat the threat of weapons of mass destruction and related goods and keep Tajikistan’s borders secure.  The U.S. Embassy, through the EXBS program, is pleased to assist the Nuclear Radiation and Safety Agency in its effort to enhance its training capacity, which will enable it to better combat the threat of contraband, including the very real threat of weapons of mass destruction.”

The U.S. Embassy will continue to support the Nuclear Radiation and Safety Agency in order to provide enhanced equipment, training, and infrastructure improvements.  The training facility will not only serve as a center for Tajikistan and Central Asia, but also as venue for international training events.

This facility is part of the many assistance projects the U.S. Embassy implements in Tajikistan on behalf of the American people.  Since 1992, the United States government has provided more than $1.8 billion dollars in assistance that support economic growth, democratic institutions, health care, education, and security of Tajikistan.