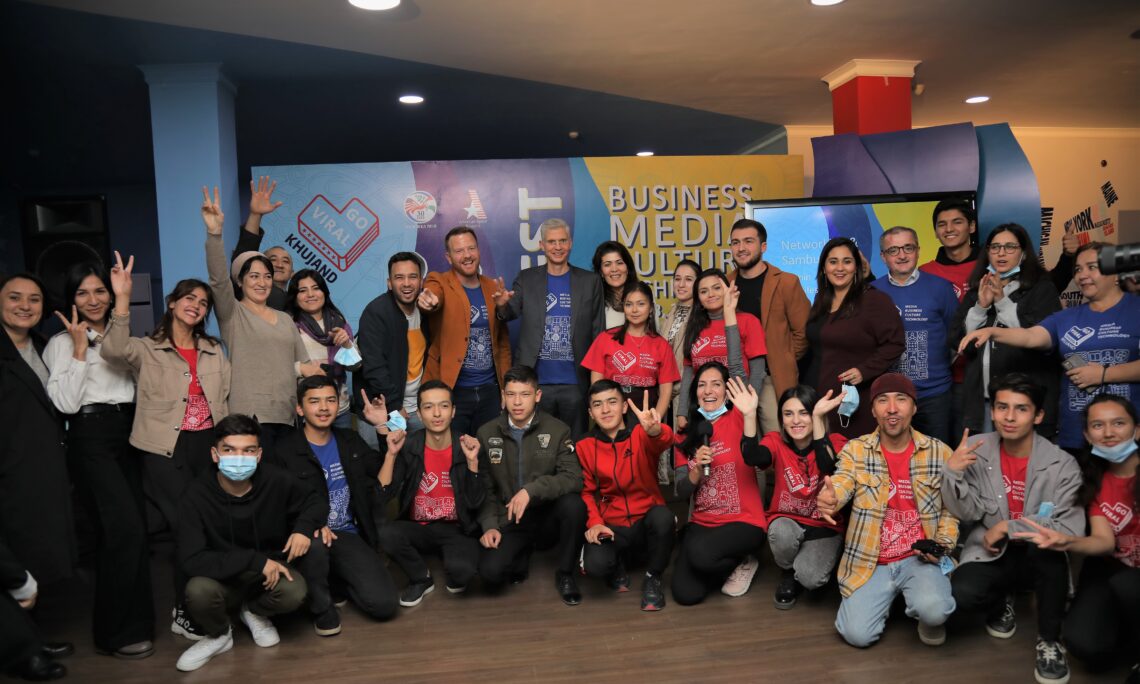 Dushanbe, Tajikistan, October 23, 2022 – U.S. Ambassador to Tajikistan John Mark Pommersheim opened the Sughd Region’s first Go Viral “Mini Festival” in Khujand.  In his opening speech, he said he likes to visit Khujand because it gives him an opportunity to interact with local innovators and creative people.

The Ambassador welcomed guests and noted that the U.S. Embassy in Tajikistan is proud to support the first GoViral Khujand Mini Fest, which will provide a platform for some of Sughd region’s most interesting innovators in fields of Business, Media, Culture, Technology, and Civil Society.

“We believe the Khujand and Sughd communities can become a key part of the GoViral network. Starting from today – from this Mini-Festival – we encourage you to use the GoViral network to share your ideas, cooperate with new partners, and connect with the world”, said Ambassador Pommersheim.

Zarrina Babaeva, GoViral’s Ambassador in Tajikistan welcomed guests and they applauded for project’s networking – all members of network, thanks to what GoViral thrives and expands.

IWPR Director for Central Asia Abakhon Sultonazarov spoke next.  He expressed the benefit of the project to the region, calling on the creative community to unite via the Go Viral Network and announcing a large regional conference will be held in Summer 2022.

Later, the Go Viral Khujand Mini Festival featured speakers in the fields of Business and Technology.  Bakhtier Kadyrov, Director of Wooppay Tajikistan, shared lessons he learned from the launch of a financial technology startup.   Dilshod Niezov, co-founder of the IT company “Silk Road Professionals” inspired the audience to realize their dreams.  Azam Akhruloev, designer of the shoe brand “Azam.tj” shared his experience scaling up a business to promote his designer shoe company.  Gangina Azimova, director of the “Khujand Grand Hotel” and “Omar Khaiyam” restaurant shared her experience building businesses using new media in Khujand.

Then, Adiba Dusmatova and Nasiba Mirpochoeva opened an exhibition of SogdArt’s works. At the festival they brought more than 40 art pieces objects – jewelries made of stones and clothes – made by 5 womenfrom 5 females- membersauthors of their studio. SogdArt- is a social startup, that trains disabled girls and women, who are victims of the violence. Adiba and Nasiba explained how their organization was formed, and during exhibition they introduced guests with the work of their craftswomen wards.

The first day of the festival was closed by Firdavs Kholnazarov. The young musician performed several famous Tajik compositions, as well as songs in Tajik, Pamiri, Russian, and Uzbek languages.

Go Viral was founded as an innovation festival in Almaty in 2017 and has expanded to become a network of creative innovators in business, media, culture, and technology from all five Central Asian countries. The U.S. Embassy in Dushanbe is proud to support the Go Viral initiative.