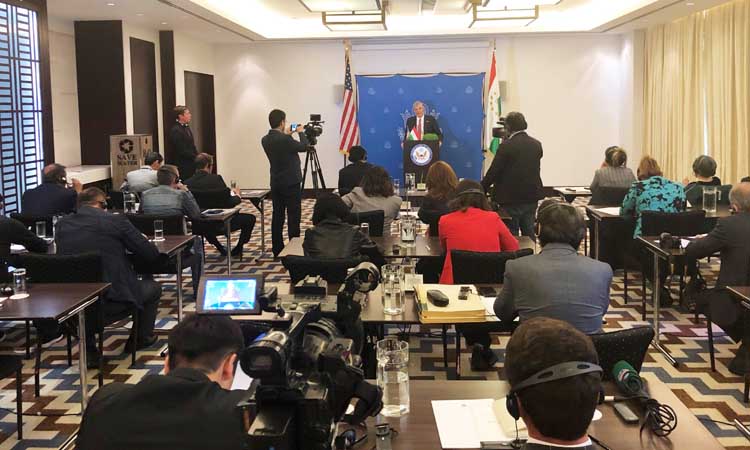 I am honored to be in Tajikistan and to serve my country as the U.S. Ambassador.  I arrived just over a week ago, and I have already experienced the legendary hospitality of the Tajik people!

In fact, the wonderful Tajik staff at the U.S. Embassy threw a Navruz celebration for the American working there.  I tasted sumanak, listened to the famous tablak drummers of Шукуфаҳои Пойтахт, watched Tajik traditional dance, learned about the ҳафт син of Navruz, and tasted Tajikistan’s famous oshi palov. Бисиёр болазаат буд! (It was very tasty!)   I look forward to exploring more of your beautiful country and getting to know you better.

I would like to say a few words, and then I am happy to answer your questions.

I have been a diplomat for 30 years and have served in China, Belarus, Germany, Russia, and Japan.  Prior to that, I worked for CNN in Moscow, and I know just how important and difficult the work of journalists can be.  My most recent post was in Kazakhstan as the Deputy Chief of Mission, and that is where I came to have a better understanding of the rich history and importance of Central Asia.

As I told President Rahmon at my credentialing ceremony last Friday, I am committed to help strengthen the U.S.-Tajik partnership during my tenure.  Our priorities are:  First, to strengthen Tajikistan’s sovereignty and border security.  Second, the United States will work to increase regional economic connectivity.  Third, we will partner with the government and civil society to promote more accountable and effective governance institutions. In all of these efforts, the Embassy will strive to build greater understanding between the people of our two countries.

Let me start by discussing economic connectivity.  Last month, the United States and Tajikistan celebrated 27 years of diplomatic relations.  Over this period, the relationship has evolved from the United States providing Tajikistan humanitarian assistance to partnering with Tajikistan in order to promote sustainable economic development. In 2018, the U.S. government through USAID provided approximately $35 million in development assistance to Tajikistan.

In just a few weeks, I will travel to Khatlon to visit several USAID initiatives supporting agriculture and trade improved nutrition, primary education, and health, including HIV and tuberculosis.

As you know, in November of 2015 the five Foreign Ministers of the Central Asian states and the U.S. Secretary of State met in Samarkand. There they formed the C5+1 platform, and they agreed to focus on promoting regional connectivity.

In addition to the many USAID projects that promote regional trade, the U.S. government also supports CASA-1000.  The CASA-1000 project will allow Tajikistan and Kyrgyzstan to sell surplus electricity to Afghanistan and Pakistan.   The U.S. has also just recently committed to support the construction of the Sebzor hydroelectric power plant together with our donor partners to support communities in Badakhshon.

As the Tajik proverb goes, Агáр ҳамсоя дӯст бошáд кишвáрат обóду зебó мешавáд. (If you neighbor is your friend, your country will be beautiful and prosperous.)  We will continue to work with Tajikistan and its neighbors to increase connectivity, which in turn will promote greater stability in the region.

Partnerships are also an essential element of stability in our security cooperation.  President Trump, in his letter to President Rahmon, confirmed the United States’ commitment to Tajikistan’s sovereignty and border security.  Our partnership in the area of security is a top priority of my government.

Over the last year, the U.S. government delivered more than $19 million of high quality equipment and training to enhance Tajikistan’s security forces’ capabilities. This assistance included state of the art ground sensors and new heavy machinery to build a more secure border.  The United States is 100 percent committed to the stability of Tajikistan and the region.

In Samarkand in 2016, the C5+1 foreign ministers also agreed on working together to counter violent extremism.  This is without a doubt another vital aspect of the U.S.-Tajik security relationship. Global terrorism is one of the greatest modern threats, and this problem can only be addressed through effective partnerships.

Countering violent extremism and terrorism, however, is incredibly complex.  It cannot be solved through military means alone.  Every government has the responsibility to ensure that its citizens’ rights are protected, so that they are less likely to succumb to the false messages of terrorists.  Every government must also seek to be accountable and transparent, not only to lessen the appeal of terrorists, but also to attract foreign investment.  This is no easy task.

The U.S. Embassy will continue to work on this issue together with the Tajik government and civil society.  We will work to promote the rule of law and enhance the relationship between police and local communities.  An example of this work is our community policing programs, which were mentioned recently at the Ministry of Internal Affairs press conference.  These programs bring civil society, youth, religious leaders, police, and government officials together in order to address problems as a community.  I’m proud of these efforts as a way to effectively address security issues in the region.

I also would like to take this opportunity to pledge that the United States will continue to promote human rights, religious freedom, freedom of the press, and freedom of expression.  The United States does this with partners — in Tajikistan and around the world — because history has shown time and again that robust civil society, political plurality, and greater freedoms allow for many voices to be heard and spark creativity and civic engagement.  And this openness contributes to both prosperity and stability, benefiting all Tajik citizens.

Let me end by discussing my excitement in working to strengthen our people-to-people ties.  This can only come through a greater understanding of and respect for each other.  In my studies of your rich language, I have begun to learn about Tajikistan’s ancient history, your rich culture, and wisdom-filled literature.

My wife Natalya and I are excited to explore your country.  We look forward to traveling across Tajikistan, visiting all eight American Spaces and speaking with your future generation.  I also plan to visit the various programs that teach English to students, government officials, and journalists from across the country.  During my time, I will meet with the many of the thousands of business professionals, government officials, and members of civil society whom the Embassy has sent to the United States on exchanges and training.

Navruz is just around the corner, so let me wish you all a Happy Navruz.

I am excited to take part in these festivities and continue learning about your rich culture.

Thanks for your attention, and I welcome your questions.