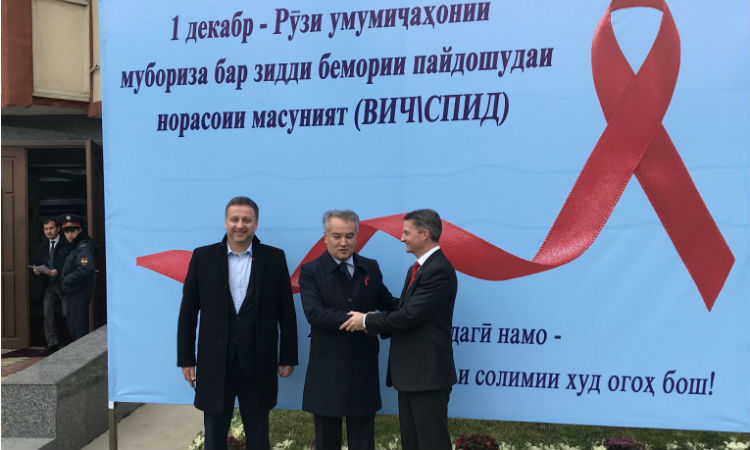 Dushanbe, Tajikistan, December 3, 2018 – The Chargé d’Affaires of the United States Embassy Kevin Covert joined the Minister of the Ministry of Health and Social Protection of Republic of Tajikistan Nasim Olimzoda and other high-level government officials at the 2018 World AIDS Day event to help raise awareness about HIV in Tajikistan and around the world. The USAID Central Asia HIV Flagship Activity, financed by the U.S. government’s President’s Emergency Plan for AIDS Relief (PEPFAR), collaborated closely with national governmental, non-government, and international agencies to arrange similar events in Khujand, Bobojon Ghafurov, Istaravshan, Konibodom, Panjakent, Rudaki, and Hissor, all of which featured information and quizzes on HIV, art competitions, and musical performances.

The spread of HIV infection remains a serious public health problem around the world, including in Tajikistan. According to the Republican AIDS Center, 10,675 people living with HIV are officially registered in Tajikistan as of June 30, 2018. It is crucial to raise awareness of HIV among key populations and connect them to prevention and care services.

Every year, on December 1, the whole world commemorates World AIDS Day in order to raise public awareness about HIV, highlight efforts made to prevent the spread of the disease, support people at risk for HIV infection as well as people living with HIV (PLHIV), and provide timely initiation of antiretroviral therapy.

The USAID HIV Flagship Activity implements innovative approaches to reach key populations (people who inject drugs and sexual partners of PLHIV) with community-based rapid HIV testing to diagnose new cases, links PLHIV to care and provides peer support for those on treatment. The PEPFAR program in Tajikistan contributes to the UNAIDS 90-90-90 global targets: by 2020, 90 percent of all people living with HIV will know their status; 90 percent of all people diagnosed with HIV will receive sustained antiretroviral therapy; and 90 percent of all people receiving antiretroviral therapy will have viral suppression. This year, PEPFAR celebrates 15 years of fighting the HIV crisis around the world, and the program invest approximately $15 million per year in Central Asia, of which approximately 30 percent assists Tajikistan with HIV prevention and treatment programs.