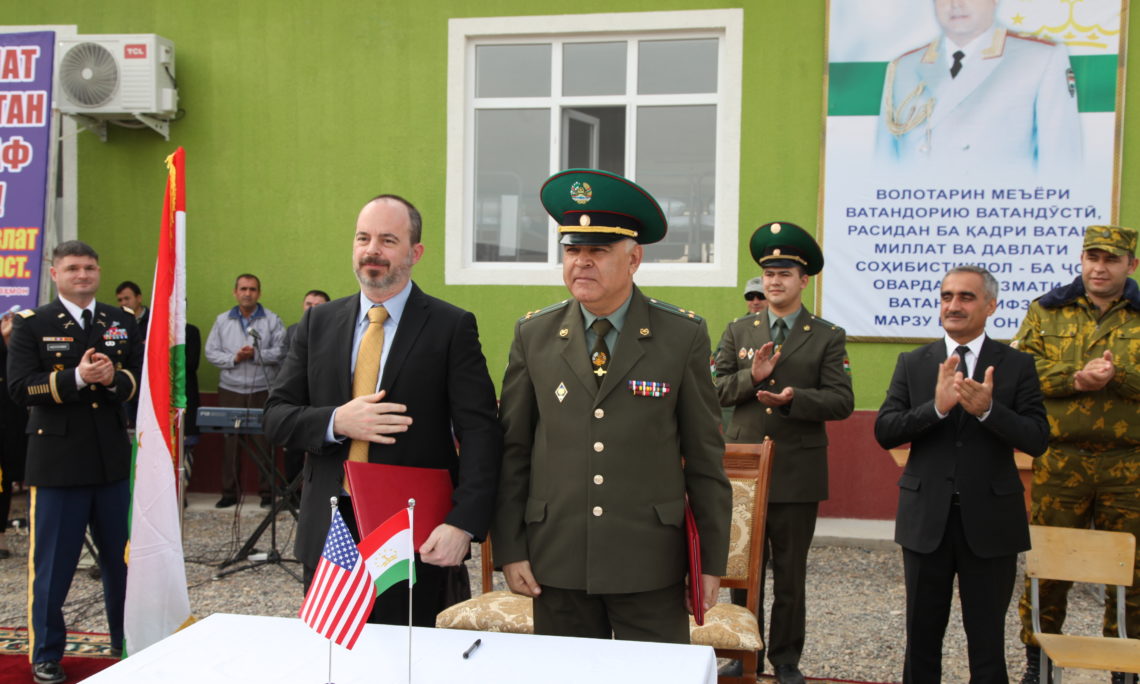 Dushanbe, Tajikistan, November 1, 2019 – United States Chargé d’Affaires John Ginkel, and Colenel Shohiyon Abdusattor, Deputy Commander of Tajikistan’s Border Guard Forces, participated in the opening ceremony for the Okultun border outpost, constructed for the Border Forces under the State Committee of National Security of the Republic of Tajikistan. The cost of the construction project was funded and implemented by the U.S. Embassy in Tajikistan’s Office of Military Cooperation, with a cost of $900,000.  The border outpost provides the Border Forces with increased capacity to consistently monitor and patrol the border with Afghanistan in the Shahritus region of Khatlon province.  The facility will significantly increase the Border Forces’ ability to monitor and interdict illegal border crossings across a15-20 kilometer range, and counter transnational threats such as narco-traffickers, smugglers, and violent extremists.  The U.S. Embassy has supported the construction and renovation of 9 border outposts and 2 detachments along the Tajik-Afghan border with the goal of strengthening Tajikistan’s border security.  The U.S. government has provided more than $100 million in assistance to strengthen Tajikistan’s border security since 2005.

The United States remains committed to partnering with Tajikistan in support of its sovereignty, security, and its role in regional stability.  These efforts support the positive role that Central Asian states will play in securing long-term peace and prosperity in Afghanistan through political support, economic connectivity, and counterterrorism.

The United States has partnered with Tajikistan for 27 years and has provided more than $1.8 billion in development and assistance through programs that support Tajikistan’s private sector, agriculture, health, education, democratic institutions, and security.