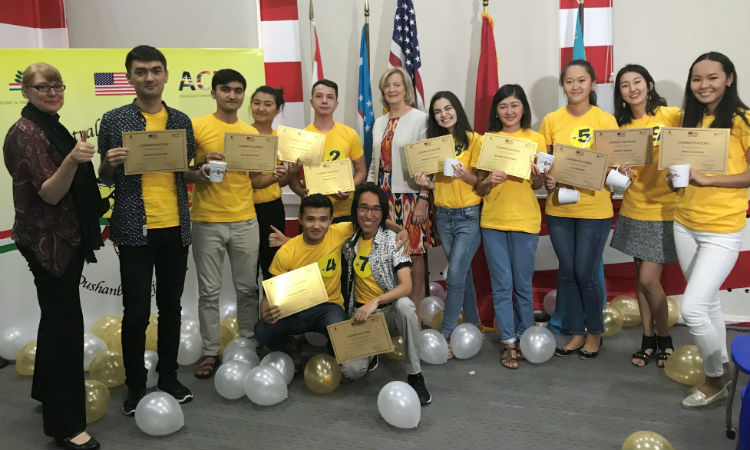 Dushanbe, Tajikistan, August 15, 2017 – U.S. Ambassador to Tajikistan Elisabeth Millard held a spelling bee for 11 participants from Kazakhstan, Kyrgyzstan, Tajikistan, and Uzbekistan at the American Corner in Dushanbe. A spelling bee is competition popularized in America in which contestants are asked to spell words in English. Elnur Rakhmatullin from Kazakhstan won the competition and was awarded a laptop computer.

These 11 university students competed in local spelling bees at American Corners throughout Central Asia, and the top three from each corner went on to compete and rank at their national competitions. This is the first time that a spelling bee competition has been held among the Central Asian countries. Among the participants were Shuhrat Nasrulloev, a student at Tajik National University, Mahzuna Yuldosheva, a student at Khujand State University, and Muhammad Menglikulov, a student at Tajik Pedagogical University. These three previously qualified at the National Spelling Bee of Tajikistan on April 24, 2017. In addition to competing in the spelling bee, the 11 participants toured Dushanbe and traveled to Varzob in an effort to increase cultural ties among the countries of Central Asia.

Spelling bees are educational activities that allow students to improve their English and compete with students around the world. The U.S. Embassy in Dushanbe plans to hold annual spelling bee competitions at the eight American Corners throughout Tajikistan. In addition to spelling bees, the U.S. Embassy in Tajikistan promotes English language learning through its English Access Microscholarship programs and numerous exchange programs sending Tajiks to the United States and bringing Americans here for cultural and linguistic exchanges. In fact, over the last 25 years, the U.S. government has invested in Tajikistan by sending over 4,000 Tajik youth to America. They have taken what they learned and made a difference in their communities, in their schools, and in their universities.