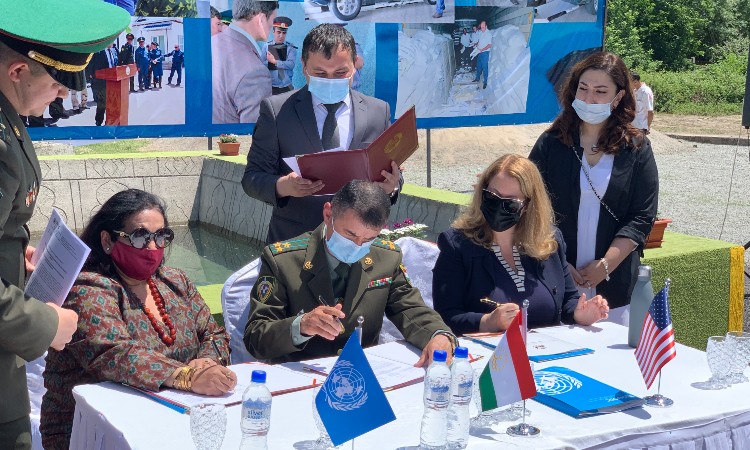 Dushanbe, Tajikistan, May 20, 2021 – On May 18, the U.S. Embassy Dushanbe’s International Narcotics and Law Enforcement Affairs Office (INL), in partnership with the United Nations Office on Drugs and Crime (UNODC), held a ribbon-cutting and handover ceremony to commemorate the completion of the Border Liaison Office (BLO) in Tursunzoda city of the Pakhtaobod jamoat on the Tajik-Uzbek border.  The BLO will facilitate information sharing between law enforcement and customs officials on both sides of the border in order to combat trafficking in persons, drug trafficking, and other illegal smuggling.

The Border Guards Service, the Ministry of Interior, the Drug Control Agency, and the Customs Committee will work together in the two offices. During her remarks, INL Director Sita Farrell reiterated that the U.S. support for Tajikistan’s border security remains strong, noting, “We continue to support Tajikistan’s efforts to combat threats to security and sovereignty.”

INL continues to fund border infrastructure projects across Tajikistan, including a new Border Guard Detachment Headquarters at Ayvoj and the Chaldovar Border Outpost. Since 2002, the U.S. government has provided over $300 million in security-sector assistance to Tajikistan.