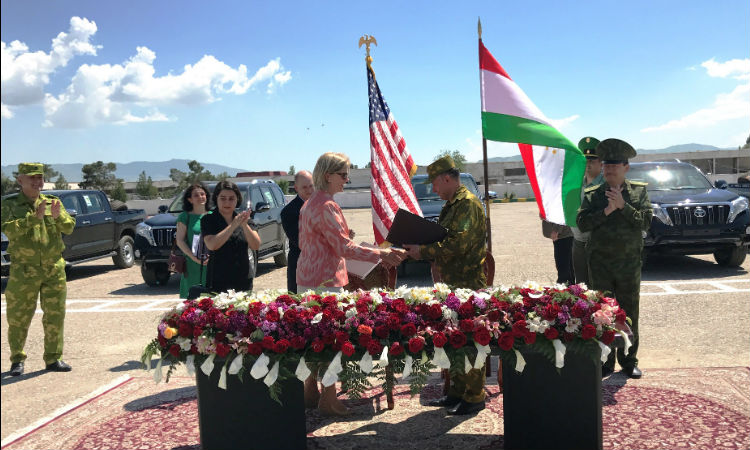 Dushanbe, Tajikistan, May 11th, 2017 – United States Ambassador to Tajikistan Elisabeth Millard, Chairman of the State Committee for National Security (SCNS) General-Lieutenant Saymumin Yatimov, and 1st Deputy SCNS Chairman and Commander of the Border Force of Tajikistan General-Lieutenant Rajabali Rahmonali attended the handover ceremony of $6 million in vehicles, communications equipment, and thermal cameras to the Main Border Guard Department under the State Committee on National Security of the Republic of Tajikistan. This assistance will be used to increase the ability of Tajikistan’s Border Guards to identify and interdict narcotics crossing along Tajikistan’s borders.

Ambassador Millard remarked during the handover ceremony that the partnership between the United States and the Republic of Tajikistan is promoting a mutual interest of securing Tajikistan’s borders against transnational threats that can affect stability and security in Central Asia. She expressed that drug trafficking is of particular concern, as revenues from the narcotics trade is often used to fund terrorist organizations around the world.

All items of equipment were funded through the U.S. Central Command (CENTCOM) Counter-Narcotics Program, and such grants represent a continued U.S. commitment toward countering the trafficking of illegal drugs in Tajikistan. Since 2006, the CENTCOM Counter-Narcotics Program has provided over $155 million dollars in equipment, training, and infrastructure to enhance self-sustaining, viable, and effective counter-narcotic forces within Tajikistan.