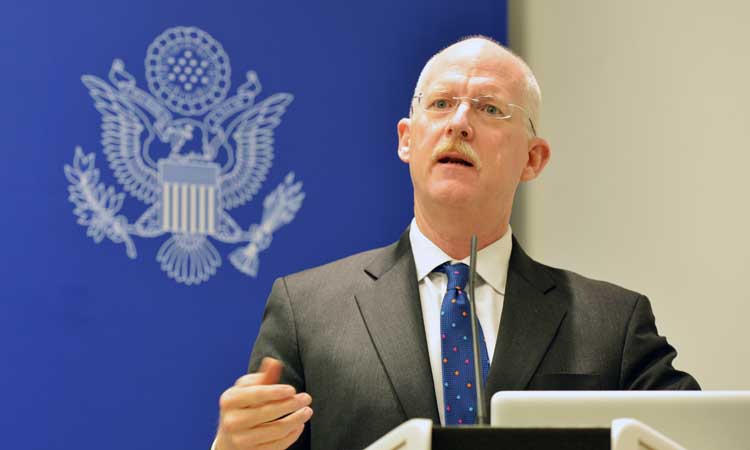 Dushanbe, Tajikistan, May 4, 2018 – Acting Deputy Assistant Secretary of State (DAS) Henry S. Ensher traveled to Dushanbe, Tajikistan on May 3 to participate in Tajikistan’s conference on Countering Terrorism and Preventing Violent Extremism. During the conference he thanked the Tajik government for its leadership and initiative for hosting the high level conference on countering violent extremism. He emphasized the United States’ commitment to defeating terrorist groups and noted the progress made in not only taking away ISIS’s territory but also diminishing its appeal to attract new members to its group. He also noted that while there are fears that the success against ISIS in Syria and Iraq would bring more fighters to Afghanistan, the United States has not seen a large flow of fighters. DAS Ensher also brought up the U.S. airstrike that killed Qari Hikmatullah, the ISIS-K emir in northern Afghanistan, on April 5 as an example of the United States’ commitment to eliminating ISIS strongholds.

He ended his remarks by highlighting numerous studies which show that government repression of political and religious rights create grievances that ISIS-K and other terrorist groups exploit. The most effective strategies are those that protect and promote human rights, and include citizens’ ability to peacefully practice their faiths free from government interference.

With 26 years of United States engagement in Tajikistan, the U.S.-Tajik partnership continues to support security and stability in Central Asia, while improving the lives of Tajik citizens. Since 1992, the United States has provided over $1.8 billion in programs and humanitarian aid that support Tajikistan’s agriculture, energy and business development, health and education, and democratic institutions.