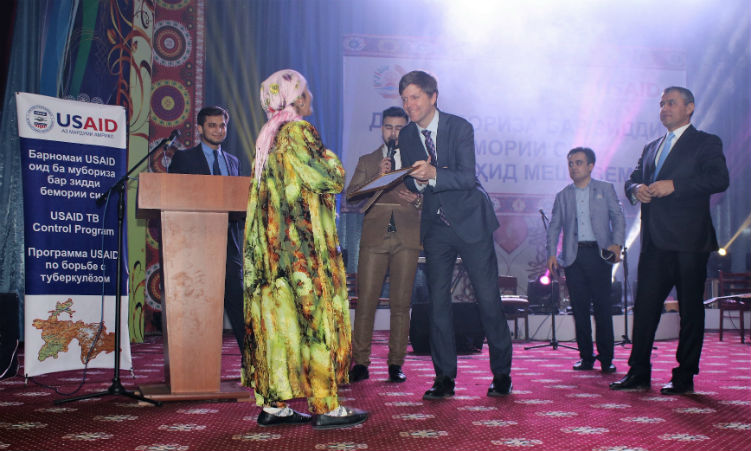 Dushanbe, Tajikistan, April 17, 2018 – To raise public awareness of tuberculosis (TB) and its impact on public health, the United States Agency for International Development (USAID) through its TB Control Program with its partners the Ministry of Health and Social Protection of the Population, the National Tuberculosis Program, and the Republican Center for Healthy Lifestyles recognized World Tuberculosis (TB) Day.

All around the world, events are held in March and April to build public awareness of TB – a preventable and curable disease that kills nearly two million people every year. The event in Dushanbe convened a large audience of government officials, international and civil society organizations, healthcare providers, former TB patients, and the public to call attention to TB prevention and social stigmatization of those affected by TB.

At the ceremony, USAID and its national partners recognized leaders in TB control: doctors, nurses, outreach and community advocates, and volunteers from across Tajikistan for their outstanding contributions to improving TB care, building public awareness of TB, and supporting those impacted by TB. The USAID TB Control Program recognized winners of its semiannual competition for the best reporting on TB in print, electronic, and TV/Radio media categories because local media and journalists play a crucial role in raising public awareness and reducing discrimination against people with TB.

The World TB Day commemoration represented one of many events held by the USAID TB Control Program and the Challenge TB project in March and April as part of a broader national TB awareness campaign. Across Tajikistan, USAID and its national partners organized presentations on TB at six of the eight American Spaces to share TB prevention messages among youth, held roundtable discussions to recognize the achievements of TB and laboratory specialists, and held TB fairs for patients and their families at Machiton and Degmoy TB hospitals, for inmates in Khatlon and Sughd prisons, and in many communities throughout the country.

The USAID TB Control Program supports the Ministry of Health and Social Protection of the Population in implementing the National TB Program by providing more effective and accessible TB prevention, diagnosis, and treatment for all, including vulnerable populations. The main objective of the five-year, $13.2 million USAID TB Control Program is to reduce the burden of tuberculosis in Tajikistan and prevent multidrug-resistant forms of the disease. The program covers a wide range of activities, including training health care workers to strengthen the health system, improving interagency coordination and cooperation, and increasing access to TB diagnosis and treatment.

The USAID TB Control Program and the Challenge TB Project are another example of U.S. government assistance to improve the health of Tajikistan’s citizens. USAID is the lead U.S. government agency that works to end extreme global poverty and enable resilient, democratic societies to realize their potential. USAID grant assistance to Tajikistan averages $30 million each year of which approximately 30 percent is directed to healthcare.

For more information about USAID and its programs, please visit www.usaid.gov