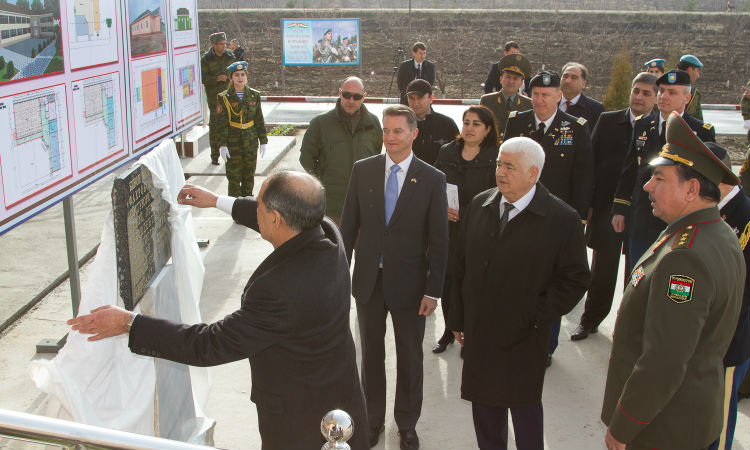 Dushanbe, Tajikistan, February 22, 2018 – United States Chargé d’Affaires Kevin Covert, Secretary of the Security Council of Tajikistan Colonel General Abdurahim Kahhorov, Adviser to the President of Tajikistan Colonel General Sherali Khayrulloev, Minister of Defense Colonel General Sherali Mirzo, and other high-ranking security officials attended the handover ceremony of a $1.3 million living quarters complex in Fakhrobod to the Mobile Forces under the Ministry of Defense of the Republic of Tajikistan.  The state-of-the-art complex for over 200 servicemen consists of three buildings that include classrooms, dining and cooking facilities, dormitories, and hygiene facilities.

At the end of last year, President Trump released the U.S. National Security Strategy, which emphasizes the role that Central Asian states will play in securing long-term peace and prosperity in Afghanistan through political support, economic connectivity, and counterterrorism.  The United States is committed to partnering with Tajikistan to support its sovereignty, security, and the stability of the region.

The United States has partnered with Tajikistan for 26 years and has provided over $1.8 billion in aid and programs that support Tajikistan’s private sector, agriculture, health, education, democratic institutions, and security.