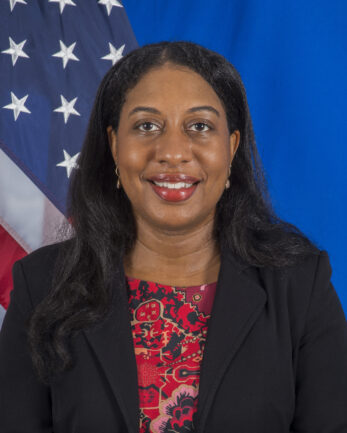 Bridgette L. Walker is a career member of the Foreign Service and joined the U.S. Department of State in 2002. She assumed her duties as Deputy Chief of Mission in Dushanbe, Tajikistan, in September 2021. Ms. Walker has held a variety of assignments at U.S. Embassies and in Washington, DC. During her most recent overseas assignment, Ms. Walker served as the Acting Deputy Chief of Mission and Political Section Chief at U.S. Embassy Baku, Azerbaijan from 2017-2019. Previously, she was the Acting Deputy Director for the Organization for Security and Cooperation in Europe in the Bureau of European and Eurasian Affairs from 2014-2016. From 2012-2014, she was the Senior Desk Officer for Indonesia in the Bureau of East Asian and Pacific Affairs. From 2010-2012, she served as the Director of the American Center at the U.S. Consulate in Alexandria, Egypt. Earlier in her career, she completed assignments in Lebanon, Indonesia, and in the Department of State’s Intelligence and Research bureau.

Ms. Walker graduated with distinction from the U.S. Naval War College in June 2020 with a Master of Arts in National Security and Strategic Studies. She also holds a Bachelor of Science from Georgetown University’s McDonough School of Business. She has studied Russian, Azerbaijani, Arabic, and Indonesian through the State Department’s Foreign Service Institute and plans to study Tajik while in Dushanbe. Ms. Walker is a native of Hyattsville, Maryland and is married to a retired U.S. Army officer.