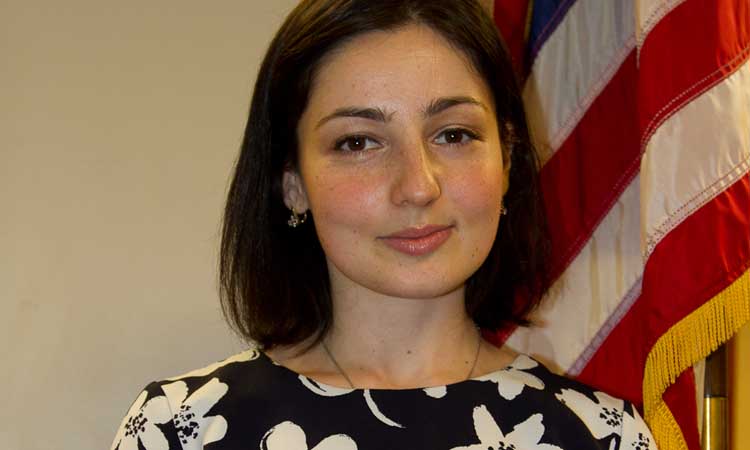 Every year on June 20, the world comes together to recognize the courage and perseverance of refugees forced to leave their homes due to conflict or persecution.  It is also a time to reflect on the contributions that refugees bring to the society or country that welcomes them.  This day is not just any other day for me.  World Refugee Day celebrates my family’s story.  It celebrates why I am here today in Tajikistan serving my country, the United States, as a diplomat.

I was born in Baku, Azerbaijan just as the Soviet Union was collapsing and Azerbaijan was simultaneously moving towards its independence and facing the looming specter of a civil war.  My mother lost her job as a physician’s assistant when her boss could no longer guarantee her safety.  My father’s business was vandalized, leaving my parents with two small children and no income.  As the situation became more dangerous and unstable in Baku, my parents gathered our belongings, my three-year-old sister and me, and fled Azerbaijan.

Giving up our citizenship in Moscow, my father appealed to HIAS, the Hebrew Immigrant Aid Society, through the International Organization for Migration to provide us with passage to Austria.  We were robbed enroute to Vienna, and arrived with only one suitcase and less than 1,000 dollars for the four of us.  Eventually, after an extensive medical and security clearance, my family was moved to Nettuno, Italy as we awaited refugee status from the United States.  By the time I was eight months old, my family had received asylum status to “the land of opportunity,” a phrase that, for my parents, was anything but a cliché.

Once we arrived to the United States, a family in the U.S. with no connection to us offered to serve as our sponsors.  Their grandparents were once refugees as well.  When the United States would not recognize their Soviet-era degrees, my parents started from scratch.  My mother found work as a housekeeper while studying for her bachelor’s degree, and my father became a taxi driver and pizza deliveryman, taking courses in computer programming and caring for us when my mother needed to study.  In 1996, my family became American citizens.

Watching my parents work multiple jobs so that “their children could have a better life” – a refrain often used by immigrant parents in the U.S. – I was taught early on that education would be our ticket to a successful future.  Their example served as a source of constant motivation and inspiration for me.  By the time I went to college, I was deeply interested in international relations and the events that led my family to leave Azerbaijan.  I majored in International Relations and Literature and minored in Central Asian studies.  When I graduated, I was chosen for a Fulbright Fellowship to teach English and study migration in Azerbaijan, and so I returned to the country that I had once fled, but this time as an American.

It was while working in Azerbaijan that I felt a call to serve my country and to give back what it had given me – an opportunity for a better life.  I realized then that my ethnicity did not matter, and that my heritage did not detract from my being an American.  Instead, my identity enabled me to serve as a cultural bridge connecting East and West – a vivid example of the opportunities America can offer and a product of the values and ideals that shaped it and me.  When a Public Affairs Officer working at the U.S. Embassy in Baku told me about the Foreign Service and encouraged me to apply for a job, I jumped at the opportunity to work with the U.S. Department of State.

Fast forward to January of 2015, I stood in the State Department with my hand on my heart and I swore an oath to serve as a diplomat and represent the United States at home and abroad.  My first tour was officially announced, and the officiator gave me the flag of Tajikistan.  My family sitting in the audience brimmed with pride to see their daughter and sister – once stateless and a refugee – now ready to serve her country abroad.

It is this tradition of a nation that welcomes immigrants and, when it can, helps those in need, which has brought me to Tajikistan today, and for that I will always be grateful to America.  Having served in Tajikistan now for two years, traveled to every region in the country, made friends with women entrepreneurs and civil society, gone swimming in the country’s beautiful lakes, and even tried to make oshi palov and qurutob, I still cannot believe this journey.

As my time in Tajikistan nears its end, I am thankful for the chance to share my story with you, my American experience, and to thank you for the amazing memories and friendship.  As the great poet Mirzo Tursonzoda wrote, “You will never forget the goodness of the Tajik people,” I will never forget my time here, and the hospitality and kindness the Tajik people have shown me.

Note on author:  Esther Tetruashvily is a Political Officer at the U.S. Embassy in Tajikistan.  This is her first tour of duty, although she has worked as a Pickering Fellow at the U.S. Mission to NATO and the Office of Russian Affairs prior to joining the State Department in 2015.  Esther was born in Baku, Azerbaijan, but grew up in Pennsylvania and New Jersey.  She studied International Relations and Literature at the College of New Jersey and Russian, Eastern European, and Central Asian Studies at Harvard University’s Davis Center.  In her spare time she loves to do yoga, exercise, read, and spend time with friends and family.