Established by Congress in the fall of 2000, the U.S. Ambassadors Fund for Cultural Preservation (AFCP) awards grants for the preservation of cultural sites, cultural objects and collections, and forms of traditional cultural expression, such as music, dance, and language in more than 130 countries around the world.  Administered by the Cultural Heritage Center, Bureau of Educational and Cultural Affairs, U.S. Department of State, the AFCP offers the United States a meaningful opportunity to show its respect for the cultural heritage of other countries.

Since 2001, the Ambassador’s Fund for Cultural Preservation Program has funded the following 17 projects in Tajikistan totaling $806,424:

2021– Preserving Cultural Heritage for Future Generations in Old City of Panjakent- Restoration of 5 cultural and historical heritages ($186,766.00). The site reflects the history of Sogdians V-VIII centuries: it is a rare documentation of the life of that time of Central Asia. With the influence of snow and rain, hot and cold weather, the site is in bad condition. The majority of the already-excavated buildings on the site are on the verge of extinction.  Today, mostly, only ruins are left owing to the fact that the main construction material was clay-bricks and excavation exposed them to the harsh elements.

2017 – Restoration of Madrasa Oim in town Konibodom the first school for women in Tajikistan ($77,159.00).  Madrasa Oim was the first educational institution in Tajikistan, and the second in Central Asia, which trained women and girls. According to historians, the madrasa was built in 1824-1825 and trained more than 200 students in its early years. In 1891, by the order of the Governor-General of Fergana Nilifkin, Komilhuja was appointed teacher of Madrasa Oim.  Madrasa Oim is a unique historical site, and as a cultural monument of the national importance was registered in the catalog of historical and architectural sites, which are protected by the government.

2013 – Preserve and protect the unique 17th century architectural integrity of Madrassa Mirrajab Dodho (Konibodom City Historical Museum) to protect the roof collapse from water damage ($79,591.00). The AFCP project activities took place at the historical site of the Madrassa Mirrajab Dodho (Konibodom City’s Historical Museum). The city of Konibodom is located in the Sughd region of northern Tajikistan, on the road between the ancient Silk Road cities of Khujand and Kukand, Uzbekistan. Khujand is the second largest city in Tajikistan and the administrative capital of the Sughd region.

2013 – Preserve the unique 16th century architectural integrity of Madrassai Kuhna (Hisor Historical Museum) $72,331.00. The AFCP project activities took place at the historical site of the Madrassai Kuhna, currently Hisor Historical Museum, part of Hisor Cultural Reserve, which includes 13 historic buildings, and sites. Located in the Hisor valley, 40 minutes outside of Dushanbe, the site was a major Silk Road city and until the beginning of the 19th century, the capital of Eastern Bukhara.

2010 – Preservation of Eastern Pamir Yak Wool Handicraft Traditions ($49,900). To support the preservation of yak wool handicraft traditions in the Pamir Mountains of the Autonomous-Mountainous Region of Badakhshon, one of the most isolated regions of the country. This economically depressed and remote region is losing its population to employment opportunities elsewhere, and the rich and varied handicraft tradition is dying out. The project focused on the identification of wool handicraft artisans, the compilation of traditional handicraft designs, and training for young and future artisans.

2009 – Preservation of Traditional Tajik Music ($29,100). To support the preservation of traditional Tajik folk music from across the country. Tajikistan’s rich and varied musical traditions survived Soviet‐period policies discouraging their study and practice but are no match for the modern popular music sweeping the country. This project included the production and dissemination of high‐quality recordings and bilingual booklets on Tajik folk music to domestic and international cultural institutions and media outlets, including Tajik television.

2009 – Preservation and Protection of the 9th‐Century Khoja Mashhad Madrassa and Mausoleum in Shahritus ($10,900). To support the continuation of work begun under a previous Ambassador’s Fund grant to preserve and protect the 9th‐century Khoja Mashhad Madrassa and Mausoleum, one of the oldest surviving buildings of this type in Central Asia. This phase of the project involved a number of measures to reverse and prevent water damage and consolidate the foundations. 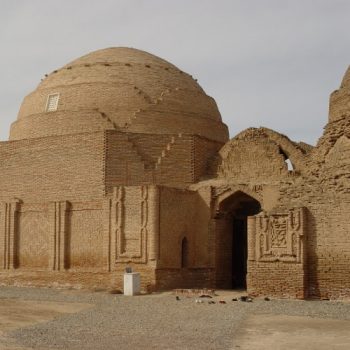 Khoja Mashhad, located in southern Tajikistan, is one of the oldest madrassas of the Central Asian region, which dates back to the 9th and 11th centuries.

2007 – Preservation and Protection of the 9th‐Century Khoja Mashhad Madrassa and Mausoleum in Shahritus ($53,405). To support the final phase of restoration work at the important 9th‐century madrassa and mausoleum. Many significant historical figures graduated from this madrassa, one of the oldest in Central Asia. However, the madrassa and mausoleum have suffered greatly from water damage, and portions of these architecturally significant buildings have been lost. This project involved the restoration of the main portal, corner towers, ornamental panels, and the cupola of the eastern portion of the building.

2006 – Restoration of the 9th‐Century Khoja Mashhad Madrasa and Mausoleum in Shahritus ($37,676). To support the second phase of the restoration of the Khoja Mashhad Madrassa and Mausoleum. Khoja Mashhad dates from the 9th century and is one of the oldest madrassas in Central Asia. The first phase of the project addressed the problem of water damage by providing drainage and consolidating the foundation. The second phase restored the west side of the structure, part of the original building.

2006 – Documentation of Tajik Historic Sites ($30,983). To support the second phase of the creation of a database of historic sites in Tajikistan. The first phase surveyed sites in the southern region of the country, the second was to continue to survey sites in the eastern region. Although over a thousand sites were documented during the Soviet Union, there are about 2000 sites throughout Tajikistan. The product provided Site catalogs of surveyed sites.

2005 – Documentation of Tajik Historic Sites ($30,821). To enable the assessment and documentation of over 1,500 historic sites throughout Tajikistan. The Tajik Civil War caused major damage and destruction to sites across the country. Since the war ended in 1997, the Ministry of Culture has not been able to assess the condition of the sites which include historic buildings, religious and archaeological sites.

2005 – Preservation and Protection of the 9th‐Century Khoja Mashhad Madrassa and Mausoleum in Shahritus ($19,045). To support the preservation of the oldest madrassa in Central Asia. The building is deteriorating from neglect and is sinking due to high ground water. The project will drain the site immediately and repair structural damage. The madrassa was constructed in the 9th and 11th centuries and the Mausoleum was constructed in the 9th century. The site is a place of pilgrimage for Tajiks and neighboring Muslims.

2004 – Preventive Conservation of the Collections of the Sarazm Archaeological Museum in Panjakent ($19,147). To preserve the Sarazm collection of ceramics, stone tools and jewelry by providing adequate storage, and supporting the renovation of the interior of the existing museum. During the Bronze Age Sarazm prospered from agriculture, cattle breeding and specialized handicrafts. By the end of the fourth millennium BC, the Sarazm settlement became one of the largest centers of metallurgy in Central Asia.

2003 – Preservation of Tajik Rare Books in Academy of Sciences Library ($25,592). To support the preservation of books of national and world heritage and to provide free access to this heritage to the Tajik public. An important part of the Central Scientific Library of the Academy of Sciences’ collection is its stock of rare books that numbers more than 15,000 volumes in English, French, German, Arabic, Sanskrit, and Persian.

2002 – Restoration of the Tajik Oral Tradition Archives ($16,000). To support the transfer of the archive onto new archival‐quality tapes, thus allowing accessibility to scholars. The Tajik oral history archives encompass the traditions and culture of every region of Tajikistan as well as Tajik‐speaking areas of Uzbekistan, and represent a huge wealth of untapped historical, anthropological, and social knowledge.

2001 – Restoration and Protection of the Collection of the State Museum of Antiquities ($30,000). To complete the restoration of what is now the largest ancient Buddha statue in Central Asia, allowing it to go on public display in conjunction with Tajikistan’s tenth anniversary of independence. Funds also provide safe and secure display cases for other items in the Museum’s collection while preserving the entire collection in the form of a digital photographic archive.

This program is part of the Cultural Heritage Center, Bureau of Educational and Cultural Affairs, U.S. Department of State.