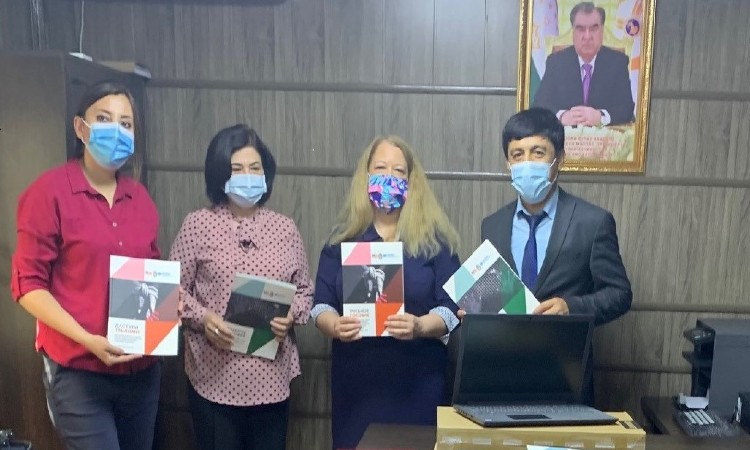 Dushanbe, Tajikistan, April 30, 2021 – The U.S. Embassy handed over training manuals and computer equipment on Counter-Trafficking in Persons to training centers at the Supreme Court, Prosecutor General’s Office, and the Ministry of Internal Affairs’ Counter Trafficking in Persons Center. The United Nations Office on Drugs and Crime (UNODC), with funding from the U.S. State Department, developed the professional training concept and four training manuals for police, prosecutors, and the judiciary to assist with identification, investigation, and court proceedings related to trafficking in persons cases.

The U.S. State Department’s Bureau for International Narcotics and Law Enforcement Affairs (INL) had previously pledged $315,000 to UNODC to implement a “Strengthening Law Enforcement Responses to Trafficking in Persons in Tajikistan” project, supporting Tajikistan’s efforts to combat trafficking. During the handover ceremony, the INL Director, Sita Farrell, congratulated the training institutions for their successful use of the manuals in eight pilot sessions for more than 100 investigators, prosecutors, and judges. She reassured participants of the U.S. Embassy’s continued support, underscoring that trafficking in persons is a global problem, and that the United States is committed to combating this phenomenon wherever it exists.

In 2021, INL allocated $600,000 to the International Organization for Migration (IOM) to improve the Government of Tajikistan’s ability to prevent, investigate, and prosecute trafficking cases, and to strengthen interagency coordination. The project will provide training and informational materials to vulnerable groups at risk of trafficking – such as migrants, victims of domestic violence, unemployed persons, young girls, and women with no education. They will learn about the risks of trafficking in persons, methods of recruitment and coercion, means of control and how to stand against it, and where to refer cases. This project will increase state institutions’ ability to implement a victim-centered approach, and conduct data collection, analysis, and reporting.