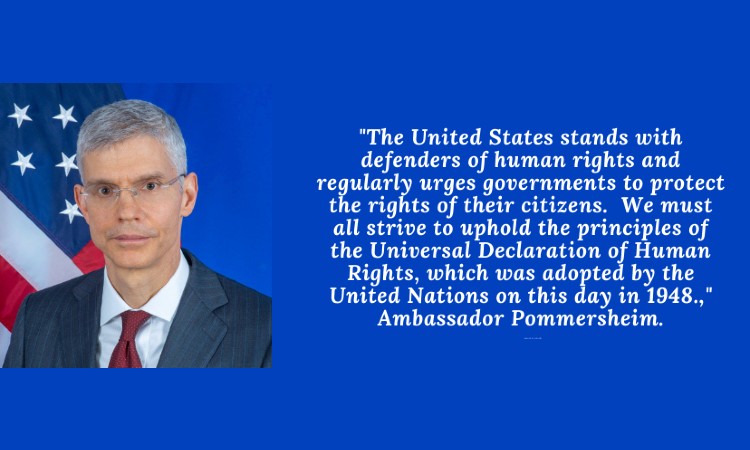 In honor of Human Rights Day, I want to congratulate the winners of the human rights awards given out by the NGO Bureau of Human Rights with support of the U.S. Embassy: the NGO Tashabusi Huquqi, Asia-Plus journalist Abdulloh Ghurbati, and journalist Mahpora Kiromova. These awardees were selected for calling attention to the struggles of disadvantaged people in society and offering them support.

Governments, NGOs, businesses, journalists, and individuals all play a role in defending human rights. The United States stands with defenders of human rights and regularly urges governments to protect the rights of their citizens.

We must all strive to uphold the principles of the Universal Declaration of Human Rights, which was adopted by the United Nations on this day in 1948. Tajikistan is a signatory to the UN’s International Covenant on Civil and Political Rights, which requires countries to respect the human rights of individuals, including freedom of speech, religion, assembly, and the right to a fair trial. My view is that all of us should work to improve the human rights of our fellow citizens in our societies, no matter where we live.” Ambassador John Mark Pommersheim.